I. The Byzantine - Slavic rite in its Ukrainian version.

The Synod held in Lithuanian Brest in 1596 attempted to unite the Russian Orthodox Church with the Latin Catholic Church and posed as one of the conditions for this union that the celebration of the liturgy in the Greek (Byzantine) rite be maintained as it was. Within this "Uniate Church,"which later came to be called the Greek Catholic Church, certain alterations took place which could be referred to as a process of latinization. That is to say, the Byzantine (Uniate) rite took on certain characteristics of the Latin rite in matters of organization, structure, theology and liturgy. This process also affected Church architecture and furnishings as well the manner of dress. The whole style and manner of expressing spiritual reality was touched. Within the broader picture, these changes were also brought on by the expansion of Latin - Polish culture into eastern regions of Poland. Some of these changes, that were the result of the implementation of the Council of Trent, and which enlarged the Latin influence, were codified and rendered universally obligatory for members of the "Uniate Church" by the Synod of Zamosc in 1720. At Podlasie in 1875, during the time of the Partition of Poland, the"Uniate Church" was disolved in that part of Polish territory which came under Russian domination. The Uniate rite was thus supressed, with Orthodox clergy taking over vacancies left in post - Uniate parishes by the deportation of priests adhering to the Uniate rite. This re - introduced the celebration of the Russian version of the Byzantine rite, the so - called "non - latinized" version. The "Uniate rite" was allowed to exist only in Galicia, that section of the Polish Partition which came under Austrian rule. After 1947, with the resettlement of people from Ukrainian and Wemkorian territories, it spread to the northern and western sections of the Republic. Today this rite is referred to as Greek - Catholic, Byzantine - Ukrainian, or simply Ukrainian.

II. The Byzantine Slavic rite in its Synodal Version.

Towards the end of the last century (1914), in the St. Petersburg and Moscow area, a pro - Catholic movement sprang up in some Russian intellectual circles as well as among some of the Orthodox clergy. The question then arose as to which rite should be observed by Russians embracing union with the Latin Church. There were three options:

a) Enter the Latin rite: For a Russian, this was equivalent with the betrayal of one's nation. Moreover, the Latin rite was completely foreign to the mentality of a pious observer of Orthodoxy.

b) Enter the "Uniate rite" in the form, which existed in Galicia. This rite was not appreciated by Russians who considered it a mishmash of Eastern and Western traditions.

c) Remain in the rite within which they were baptised and raised: That is to say, the pure Byzantine - Slavic rite in its Russian version.

When questioned by the Vatican they replied: "Nec plus, nec minus, nec aliter" (Add nothing, remove nothing, change nothing). And so, for Russians, the> third option was adopted: to remain within their own rite. This rite is sometimes referred to as synodal. It comes from the fact that in 1700 Peter I abolished the Patriarchate of Moscow and established the Holy Synod, which would govern the Russian Church under his authority. The liturgical decrees of the Synod meant that the Byzantine - Slavic rite took on liturgical characteristics proper to the Russian National Church. It is precisely this rite which was practised by the first Russian Catholics. It was the beginning of the so-called Neo-Uniate movement. 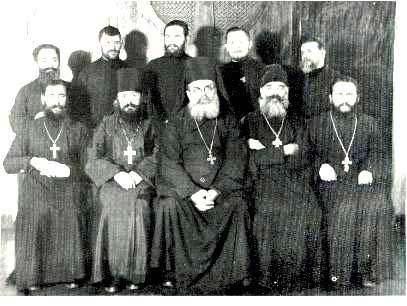 After 1917, pro - Catholicism flourished among Russian emigrants in Far Eastern Manchuria. After 1924, according to the wishes of Pope Pius XI, the Catholic apostolate among Russian emigrants in Harbin, Manchuria, was taken on by the Congregation of Marians.(LYCEUM HARBIN). This apostolate was carried on in the Byzantine - Slavic rite according to the Synodal version. After 1918 a parallel pro - Catholic, neo - Uniate movement sprang up within the borders of the now independent Poland. Many of the former "Uniate" parishes (destroyed during the Partition and taken over by Orthodox clergy) desired a return to the Catholic Church. These parishes maintained the rite,> which was then practised - the so-called synodal version. In 1937, 71 priests of the Byzantine rite served in what was then Eastern Poland. A large number of parishes ministered to some 20,000 faithful. In all of these parishes the Byzantine - Slavic rite was observed, that is to say, exactly the same rite as was observed by the Orthodox brethren. After World War II, only ten "Uniate" parishes of synodal rite remained within the new Polish boundaries. After post - war tribulations (the "Vistula" resettlement, the Stalinist regime, Communist hostility to any form on religion, but especially towards the "Uniate Church") only one such parish remained. It is in the village of Kostomloty on the Bug River. It maintains links with Greek Catholic parishes in other areas of the country, but it retains its own rite - the synodal version of the Byzantine - Slavic rite. Although the part of Poland east of the Vistula River comes under the authority of the Greek Catholic Metropolitan of Przemysl, the parish of Kostom loty is directly under the jurisdiction of the Latin Metropolitan Archbishop of Warsaw, who is the Primate of Poland. In the Byzantine - Slavic rite, the Holy liturgy can sometimes becelebrated in other settings according to the needs of certain groups and religious communities. It is fitting to add that the practise of this rite in Polandis an expression of spiritual adhesion to the legacy of the mission carried out by Saints Cyril and Methodius, who where the first to celebrate the liturgy (both Byzantine and Latin) in the Slavic language. Catholic parishes belonging to this rite are also to be found among Russian emigrants to Western Europe, North and South America and Australia. The list of these parishes can be found on the Internet. http://praiseofglory.alabanza.com/stmichael.htm/listing.htm/ In today's context of ecumenical dialogue between the Orthodox and Catholic Church, the Byzantine - Slavic rite neither wishes, nor aims to promote so called unionism or proselytizing (converting the Orthodox to Catholicism). It only wishes to be a witness of the fact that true Catholicism in the Church is not opposed to the maintaining of one's own liturgical and theological tradition. Moreover, the Byzantine - Slavic rite wishes to be an instrument drawing Orthodox and Roman Catholic liturgical traditions closer together.

In the Catholic Byzantine - Slavic rite parish of Kostomloty, Eastern Catholics, Roman Catholics and Orthodox co - exist in harmony. Under the patronage of the martyr Saint Nikita, the parish gathers the three groups together for a common liturgy. This coming together takes place in a context where each one maintains his own confessional identity.